There are some really great seat makers out there. Some custom, some semi-custom and some are simply “off-the-peg” as it were. After several years of admiring Rocky’s seats (Bill Mayer Saddles), I decided to take the plunge with a custom maker.  As an American custom drum builder I know the meaning of “true custom”. What Bill Mayer Saddles does IS “true custom”.

I wanted something more than just a custom seat. I wanted a few things: I wanted it to be comfy on road, be useful off-road, be tough and have the “Look What The Cat Rode In” logo embroidered on it! (Yeah, really!) Nothing but the coolest for “Darth”!

Spoiler Alert: Rocky and his crew knocked it out of the ball park!

I did what Rocky (Bill) refers to as a “Ride In”.  Meaning, I ride the bike in, they do the work while I wait and I ride home with my new seat. It wasn’t easy, but we finally set up a time between both of our crazy schedules. I had a near miss having Rocky make a seat for me several years ago when I contacted him about making a custom seat for my 2009 GS 1200 at the time. I sold the bike before ever having Rocky make it. So, today was a bit epic in the sense that we finally were able to make the seat dream possible.

Rocky now has seat pans, pre set-up for GS 1200’s making it a faster turn around and enabling a person to keep their stock seat. This is great for if and when you ever sell your bike. Basically, if you keep buying the same bike you can probably keep the seat for many, many years.

The BMS crew are such great, professional folks who really are dedicated to crafting custom seats. From seat assembly and carving the foam to sewing the materials. Materials, by the way, vary from various vinyls to Italian leather both solid and perforated. Many colors and embroidery are available. Rocky has a nice little set-up where you can relax on a sofa, have coffee, snacks, fresh fruit and water while you wait.

Rocky had me test ride a few variations of his seats. First one was a tractor style seat. Not for me! The Jim Hyde inspired dual sport seat appealed to me more. It’s thinner where your legs would touch when standing. Makes more sense for me as I do frequently off road with “Darth”.

We decided a medium density foam with a slightly lower cut, but move the seat adjustment up in the front thusly leveling the whole ensemble. Perfect! Within a couple of hours, the whole thing came together including the passenger pillion with a more carved out butt area for two up riding. The face was brought up slightly and worked out perfectly for the embroidered, “Look What The Cat Rode In” logo.

The ride home was more pleasant than the ride up and Rocky promises that the seat will break in even better over the next 1000 miles. I highly recommend Bill Mayer Saddles if a custom seat is what you are after. 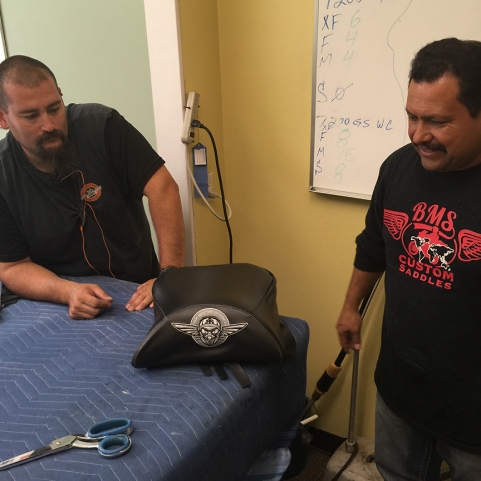 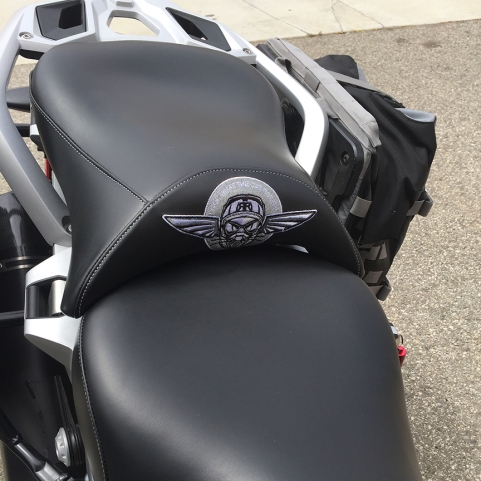